We Built a Four Cable Method Pedalboard to Switch Between Two Amps!

We Built a Four Cable Method Pedalboard to Switch Between Two Amps!

We had a customer that wanted to switch between two different amplifiers with ease, simple, right? Not exactly. The rig used effects both, in front of the amplifiers and within their FX Loops. A simple A/B/Y box won't cut this as you are needing to switch two different signal paths at once. We go through how we accomplished the needed switching for the customer, while keeping the tap dance to a minimum.

The overall goal of this rig, as we explained, is to be able to switch the pedalboard between Amp A and Amp B with ease. The customer uses a clean amp and dirty amp for different tones and often needs to switch between them in the middle of a song. Switching with a single foot switch stomp is ideal as it will make for less time and confusion whilst playing. The rig is only made to switch between the two amplifiers, never to have them used simultaneously. The other challenge is that the customer uses effects in front of the amplifiers and within their effects loops. This makes for two different signal paths that need to be switched simultaneously.

To achieve the switching on this rig, we relied on three main pieces of gear. The three pieces of gear that made this possible were the Boss ES-5, Radial Engineering Twinline, and RJM Y-NOT. The Boss ES-5 was selected as the customer only had 4 effects that he needed access for switching on/off at command. All of these effects were "pre" effects, or effects in front of the amplifier. The ES-5 will also serve as the main control of the rig. It will serve to switch both signal paths, pre effects on and off, and switch one of the amplifier's channels. The ease of programming involved in the ES-5 allows the user to create presets

The RJM Y-NOT serves to switch the signal chain in front of the amplifiers. These devices are handy because they are an ABY switch that can be controlled via TRS or MIDI. Their MIDI programming is as easy as pressing two buttons. This pedalboard utilizes MIDI control for switching the A/B functions of the Y-NOT device. 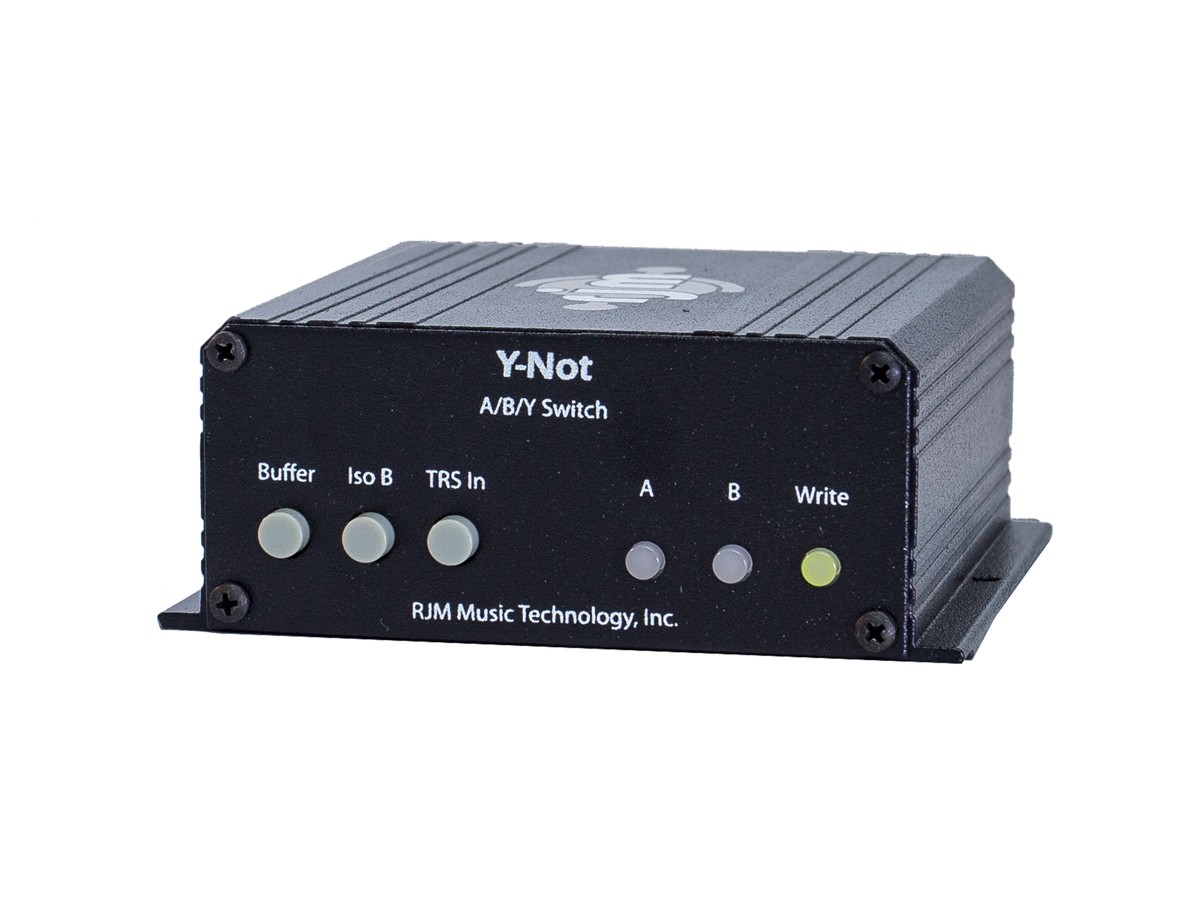 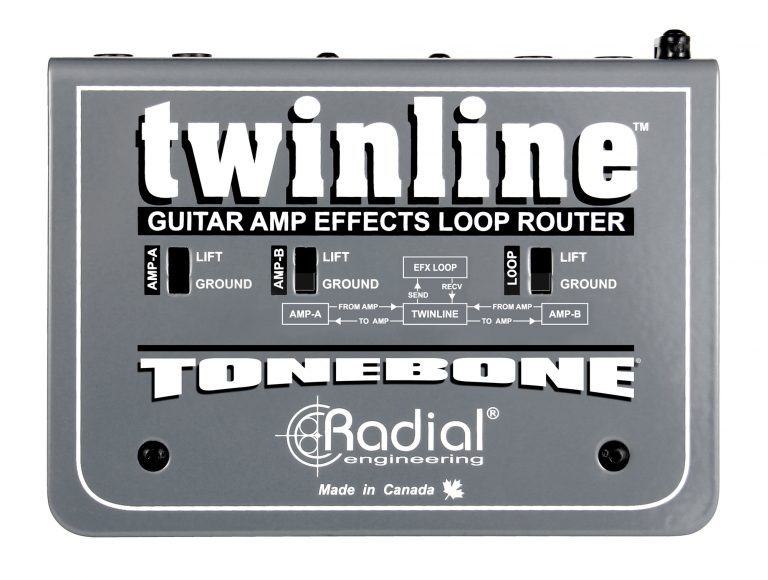 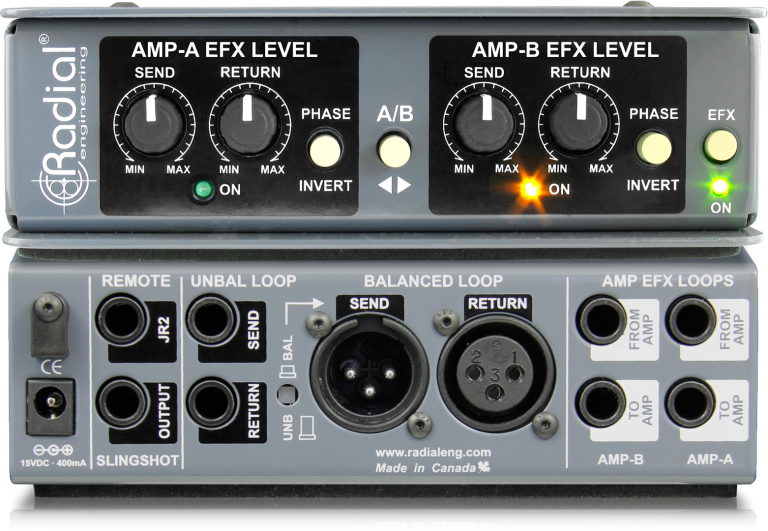 The customer already had a Friedman Pedalboard and the pre/post effects needed for the board. The rig consisted of an Xotic Wah, Xotic EP Boost, Jam Pedals Retrovibe, Paul Cochrane Tim, XTS Precision Multi-Drive, TC Electronic Chorus + Pitch Modulator + Flanger, two Strymon El Capistans, and a Strymon BlueSky. Regarding their order in the signal chain, the effects in front of the amps were as follows:

This effects chain was established by the customer on his previous rig and it was what he wanted to stick with. The EP Boost remains almost as an always on type pedal. The immediate switching was needed for the Retrovibe, Tim, and Multi-Drive. The 5th loop was dressed into an open spot on the board for experimenting with different effects and trying them out.

The Effects Loop of the board did not require immediate switching on/off. Most of these pedals were set for a song and left on. This is why they weren't required to be in a loop switcher. Here is a diagram of the pedals going into the effects loop of the amplifiers:

DC power: The customer provided the board with the Friedman power grid power supply. Due to the amount of effects and the type of effects, additional power was needed to ensure all effects received their own isolated power port & efficient power. The Cioks 4 power supply was chosen to additional power. These units are ideal as they feature 4 ports that can switch between 9, 12, 15, and 18 volts of DC power! In addition, the current provided by these ports is high (660mA for a single 9V port!). This power supply was ideal for our needs as the Radial Twinline requires 15V DC power, which is a rather weird requirement. The Twinline can get by on 18V power; however it wears out the equipment a bit faster than running on 15V. We needed an additional power supply regardless of the Twinline, so why not keep it happy and provide it 15V?! The addition of the Cioks 4 also allowed us to run a power cable to the open spot on the pedalboard. The power ran to this part of the board was 9V 660mA and can easily be switched to other voltages as necessary.

AC Power: The TC Electronics Chorus/Pitch Modulator/Flanger has an AC power cord built directly into the pedal. The board requires AC power be supplied to three items: The Cioks 4, Friedman Power Grid, and TC pedal. We drilled a powerCON connector to the rear of the board and terminated all three of these devices to it. Therefore, only a single power cable needs to be routed to the board to successfully power everything - plus it has a locking connection. 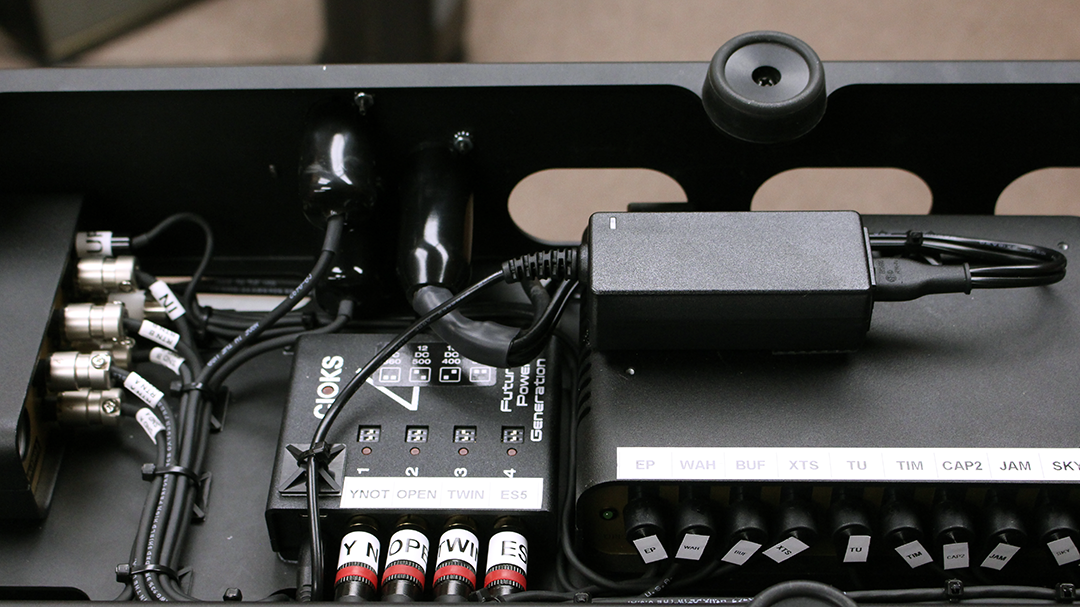 Now, importantly, how to get everything talking to one another and accomplish the necessary switching. The ES-5, as mentioned previously, will talk to the RJM Y-NOT via MIDI. Therefore, a single MIDI cable will connect the ES-5's MIDI Out to the Y-NOT's MIDI In. To switch the FX Loop signal chain between amp A and amp B, we connected the Boss ES-5's CTL 1/2 port to the footswitch port of the Radial Twinline. This will successfully switch the FX loop signal to go from Amp A to Amp B using the Twinline. Finally, one of the customer's amplifiers has channel switching. We ran the ES-5's CTL 3/4 port to the Friedman Buffer Bay to successfully switch between channels when utilizing that amp.

The customer uses the Friedman Buffer Bay for the input and outputs of the pedalboard. The new board's configuration needs more jacks than the Buffer Bay allows for (3 total connections per amplifier, an input, amplifier control, and power). We used the buffer bay for the input (to utilize the built in buffer), FX Send and Return for both Amps, and a footswitch jack for the amplifier that has multiple channels. We already explained earlier that we drilled in a PowerCON connector on the back of the board to sufficiently power everything. Therefore, this leaves the connection needed for the front of each amplifier. We drilled in two Neutrik locking 1/4" connectors in the back of the board to accommodate these connections. 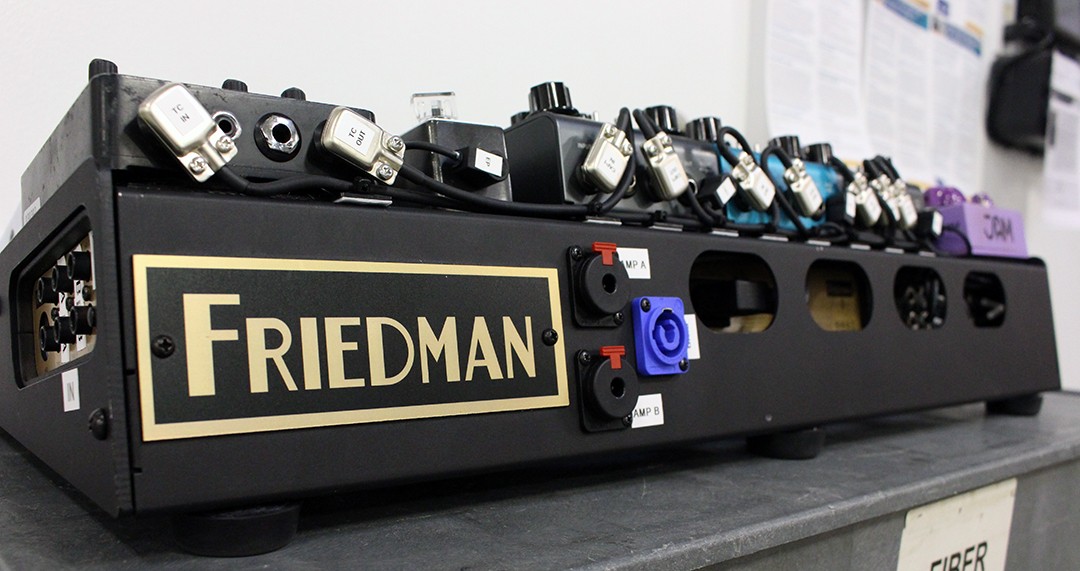 There are a few ways that the ES-5 can be programmed to control the switching of each signal chain from amp A to amp B. We are covering the easiest way to do this, which utilizes PC commands for the RJM Y-NOT. This allows you to successfully program patches on the ES-5 that will control switching between amps, as well as turning effects within the ES-5 on and off - all with a single tap of a foot switch.

To Start, ensure the Y-NOT is on channel 1 for receiving MIDI Commands. You can use any channel you'd like; however you just need to be sure that you are sending MIDI commands to the correct channel on the ES-5. In the case of this rig, the ES-5 is the only MIDI device, therefore we use Channel 1 on the Y-NOT. The Y-NOT comes standard on Channel 1, so we are good here. (For tips on how to change the Y-NOT's MIDI channel or check the Y-NOT's MIDI channel, see page 8 of the RJM Music Technology Y-NOT Manual)

Now, we must establish which PC Commands control the functions of the Y-NOT. We will start by defining program change 1 to switch to A on the Y-NOT.

This designates that PC change 1 will signal the Y-NOT to select Amp A for the "pre" signal path. To program a patch to select Amp B, it is similar to the above:

The switching for the pre effects signal is now established. We now need to allow the ES-5 to control the A/B switching of the FX Loop signal.

3. Program the ES-5 to Control the Radial Twinline

We will start by completing the preset that selects Amp A.

Now, we will go to the patch for selecting Amp B and program it to change the FX Loop signal to Amp B.

Just like that, you now have patches setup to change between amp A and Amp B. You can now tweak these presets to also turn pedals on/off within the ES-5, control amp functions, and/or send MIDI commands to other MIDI capable pedals. You can repeat these steps to other presets of the ES-5, depending on what you'd like the presets to do.

No comments available for this Blog

Please Sign in to add your Comment
Can't subscribe you right now. Try later
Thank you for subscribing to the newsletter! We hope you enjoy shopping at Best-Tronics Mfg., Inc.